What are the most frequent mental health complications which first responders develop?

There are many mental health complications which first responders can develop as a result of exposure to trauma. The data quoted in the beginning of this lesson indicates that such those may include substance abuse, depression, suicidal ideation. Other sources suggest sleep deprivation, anxiety, hazardous stress and secondary trauma.[1] All these mental health complications can be regarded also as a sign to motivate a first responder to seek mental health treatment.

One of the frequently encountered mental health complications is diagnosed as Post-traumatic stress disorder or PTSD and is often accompanied by other symptoms listed in the previous paragraph.[2]

PTSD as a mental health disorder is addressed in terms of its symptoms more extensively in Module 6 of this training. Nevertheless, for the purposes of context brief information is provided at this stage as well.

The American Psychiatric Association defines PTSD as “a psychiatric disorder that may occur in people who have experienced or witnessed a traumatic event such as a natural disaster, a serious accident, a terrorist act, war/combat, or rape or who have been threatened with death, sexual violence or serious injury”.[3] As a condition it is associated with intense or disturbing thoughts and feelings about the traumatic event.[4] It often involves reliving the experience at random points throughout the day or through nightmares.[5] Sometimes people with PTSD may feel estranged from other people and avoid certain situations – especially people or situations which remind them of the trauma.[6] Symptoms include also disproportional reactions to accidental touch or loud noises.[7]

As it was said in the beginning of this training, PTSD does not need to be the result of exposure to a single traumatic event of exceptional gravity. It might be the result of accumulated exposure coupled with aggravating factors. Similarly, the PTSD condition might be developed long after the traumatic event and it is even possible that the diagnosed person does not experience the event personally but learns about it.[8] Such are the cases, for instance, when someone develops PTSD after learning about the violent death of a close one.

PTSD should be recognised for what it is – a mental health complication. It should not be belittled as a character change or confused with a principle character trait – it is the past haunting a person.[9]

Non-experts in psychiatry or psychology are not expected to diagnose and treat PTSD in first responders who show symptoms. However, it is important to be able to recognise the symptoms so that one can motivate the sick person to seek mental health treatment. For this reason, this training suggests a set of questions for a brief screen:[10] 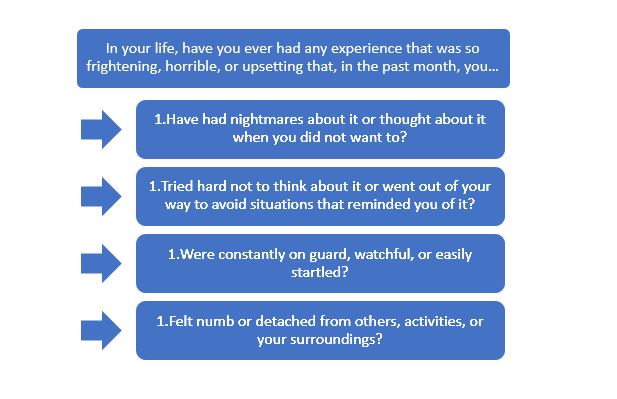 All the questions can be answered with YES or NO.

If your conclusion is that the person might have a PTSD condition (having answered mostly with YES), it might be good to motivate them to seek mental health treatment.

Consider the next section to see what challenges and barriers first responders often experience to seeking treatment.